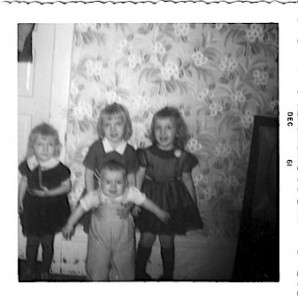 Lori (left) with sisters Kim and Jody (back) and Kysa

Lori Dee Ewing was born November 24 on her mother’s birthday — the third of five children Don and Hope Ewing had in less than five years.

As a child, Lori and her siblings often accompanied their champion trapshooting father as he traveled the U.S. competing in a number of state tournaments. He almost always won, and they’d argue over who got to carry the trophy back to the Suburban.

Lori married her longtime love Steve Mathes in August 1982, and, with family a top priority, chose to remain in western Iowa, where together they raised two children, Brooke and Luke.

Lori and most of her siblings began writing at an early age — a talent they inherited from their mother — and has written a number of poems about family, loss, and the human condition.

The poem for which she is most well known is “A Christmas Poem – For My Family,” which she wrote for her siblings in 2004, had copies made on parchment paper and framed, and then presented as gifts to her sisters and brother that year on Christmas Eve. Thousands visit her website every Christmas to read the poem.

Lori and Steve have one grandson, Lief, and anxiously await the birth of their granddaughter, Justice, who is expected to arrive March 10, 2011. They currently share their home with three Lhasa Apso dogs — Ruggles, Bogart and Dottie — and remain close to their children, siblings and large family.